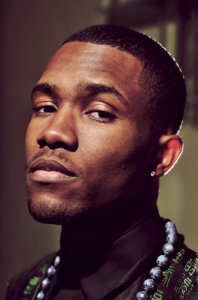 Frank Ocean sings love songs from him to him. I posted a comment on my Facebook timeline on Tuesday after a reviewer of his new album said she heard the crooner singing about a him instead of a her. That observation alone wasn’t enough to make the news, but then Ocean did something unprecedented.

He posted an open letter on his Tumblr. He tells a story that begins with

In addition to being poetically beautiful, the heartfelt honestly of Frank’s narration about his first unrequited love reminds hip hop heads of the power of love and not lust.

Dream Hampton and Jamilah Lemieux embraced and thanked Ocean for his bravery in sharing with us despite hip hop’s rampant homophobia. But much of rest of the hip hop world is busy hailing Ocean as hip hop’s first gay artist. There’s one problem with that, though. Ocean never said he was gay. He said he loved a man. I respect that difference.

Outisders need to label Frank and his relationships; Frank does not. And that, in my opinion is the legacy of hip hop. I agree with Hampton when she observes,

You fulfill hip hop’s early promise to not give a fuck about what others think of you.

I concur with Lemieux when she writes,

I hope that Frank Ocean doesn’t become the “gay singer,” for it would be criminally unfair for him to wear that label as so many of his musical peers and elders are sleeping with and love same gendered persons, while selling images of hyper-heterosexuality.

Let Frank Ocean love who he loves. Do not let Ocean become a poster child for an agenda that’s not his own.

Yes, mainstream hip hop has been decidedly shifting towards a feminine masculine persona since at least 2008 with Lil Wayne’s “Lollipop” and his shout out to Tre Songs, Drake’s emo raps, Lil B’s fluidity, pretty bitch and princess declarations, not to mention the advent of skinny jeans and brighter colors on hip hop performers and fans alike. I mean, we are clearly not in the same era that introduced the aggressively masculine and admirably muscled 50 Cent.

However, Ocean is a R&B singer. His generic home alone offers him more leeway in his self-presentation. It will still be incredibly difficult for a male rapper to be this open about his sexuality. One of the reasons Drake and Wayne can get away with expressing their feelings is because they have also learned to sing on their tracks. Singing embraces a vulnerability that rapping does not. The confrontational combativeness that is rap’s legacy combined with its guttural, staccato, often rapid fire sounds are not as compatible with love commentary irrespective of the love interest’s gender.

When the L.A. Times muses that “Frank Ocean’s talent and sexuality could push musical boundaries,” I think maybe, but no time soon. Twitter was an Ocean of love yesterday, and that was encouraging, but as long as we label Ocean the gay hip hop artist we’re simply creating new boxes to put people in. That’s not quite liberation.

In the God Talks appendix of Rap and Religion, I interview several hip hop heads. Check out this teaser from artistic director and choreographer Christopher Eclipse about hip hop, a higher power, and homophobia.

Christopher Eclipse: That’s exactly what I mean. I can come into it with the ideas that I’ve gained from hip hop and religion/spirituality and be heard. It is that structure that gives me my voice inside of hip hop, even though they don’t sometimes realize it. That’s what it is. I feel very confident and proud to say that, yeah, I’m a gay man. I’m a gay man who loves hip hop. I’ve been loving hip hop. I am hip hop. It’s like one of the proudest things I can ever say. The only reason I have to use the term gay is because there’s really no other term to explain who I am and what I am. I’m really more than that. It’s important that the people hear that. It’s important that people know because otherwise we could just be erased. “Oh, these people don’t exist.” Quietly, there’s so many of us inside that industry dealing with and battling with religion and who God is and all of these real oppressive thoughts. They’re afraid to come out, but you know what? There’s people like me here. Until that time comes, I’m going to be the one that stands there.

Christopher Eclipse and I continue this conversation, but you’ll have to get the book to read the rest.