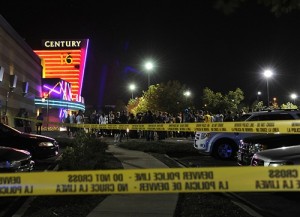 I’ve been walking through my life wondering about all the terrible things that could happen when I go to the grocery store, ride my bike to the pier, think about attending a movie. All of this second-guessing from a woman disconnected from the crime, hundreds of miles away defines how terrorism works. The Aurora, Colorado shooter (I would rather acknowledge the locale than his name) effectively used violence to intimidate and create fear among average Americans. I don’t care that our stereotypical image of a terrorist is a brown Muslim man—white folks have been enacting violence to instill fear in people of color since they murdered Native Americans and dragged stolen Africans in chains to a new continent.

Hugo Schwyzer wrote an excellent essay that everyone should read titled “Why Most Mass Murders are Privileged White Men.” He argues that white male privilege contributes to a unique entitlement not engaged by other men of color who, when they murder, are consistently demonized for being not only depraved but also socially and culturally deficient because of their race. Schwyzer breaks it down:

White men from prosperous families grow up with the expectation that our voices will be heard. We expect politicians and professors to listen to us and respond to our concerns. We expect public solutions to our problems. And when we’re hurting, the discrepancy between what we’ve been led to believe is our birthright and what we feel we’re receiving in terms of attention can be bewildering and infuriating. Every killer makes his pain another’s problem. But only those who’ve marinated in privilege can conclude that their private pain is the entire world’s problem with which to deal. This is why, while men of all races and classes murder their intimate partners, it is privileged young white dudes who are by far the likeliest to shoot up schools and movie theaters.

I am uninterested in any conversation about the shooting that does not take into account race, class, and gender in the ways that David. J. Leonard also does in his blog, “The Privilege to Murder.” Despite our collective grief, we must be willing to ask ourselves the difficult questions.

In chapter five of Rap and Religion: Understanding the Gangsta’s God, I write about Godly power and how when rappers appropriate God’s power to liberate themselves, the end result almost always includes oppressing someone else. (Check out this video for more of my thoughts on power.) The uses of power in rap music are often inherited from the uses of power in religion. Both Christianity and Islam have long histories of misusing power in order to violently subjugate nonbelievers. And those histories began long before guns were a street commodity and before rappers lyrically bragged about bodying folks.

Ice Cube combines rap, religion, and violence in the third verse of “When I Get to Heaven.” He revisits a familiar frame that uses God to justify violence.

If have to cock the hammer, God won’t mind

If I have to kill the human swine

Cause God is a killer from the start

Why you think Noah had to build his ark?

Violence never happens in a vacuum. Never. Cube lyrically threatens violence against the white supremacy that has been kickin’ black folks asses for 400 years (verse one). The Colorado shooter (whether mentally ill or not) was acting on that same white supremacist privilege when he interrupted the normal, daily activities of innocent people to unleash his own aggressions. And yet, his news coverage is not racially tinged. And yet, deciphering his motives is so much more important than understanding the unprecedented and widespread violence among black youth in Chicago this summer.