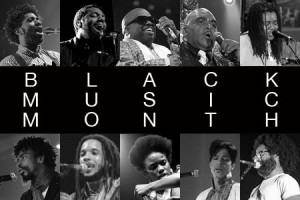 In June of 1979, President Jimmy Carter declared that the month would celebrate black music. Each subsequent president has continued the Black Music Month tradition, and in 2009 Barack Obama officially renamed the recognition African American Music Appreciation Month. This renaming from Black to African American by our first Black president is significant.

In 1979, the racial designator Black carried remnants of a revolution. First embraced by members of the Student Nonviolent Coordinating Committee (SNCC) and then the Black Panthers, Black was a bold affirmation. By reclaiming a word that usually meant dark, foreboding, and evil, Black people embraced the beauty of blackness. Negro and Colored were no longer empowering enough for a people striving for radical social change. Furthermore, Black as a term distinguished Black people from the Americanness of other immigrant populations that were Asian American, Italian American, Mexican American, etc.

So when a Black president renames the celebration African American Music appreciation month, he’s trying to put the Americanness back in so no one feels left out.  (See my other work on President Obama’s preference for Americanness over Blackness.) But the renaming rewrites history. Of course, Black music is uniquely American. Slavery, restoration, segregation, and various sinister forms of urban oppression give black music its emotive quality, but declaring it American covers up the fact that blacks have always faced barriers from decidedly nonblack American businessmen when trying to control their musical production.

In every era of Black music from the race records of the 1920s until today Black music has been stolen from Blacks by other Americans. (If you don’t believe me, re-watch Cadillac Records, Ray, or Dreamgirls. Then google any black singer who has ever filed for bankruptcy.) Graffiti writer William Wimsatt aka Upski once quipped,

Let me offer this advice to Black artists: next time y’all invent something, you had better find a way to control it financially, because we’re [whites] are going to want that shit.

The tension between Black music and America is an essential part of what makes Black music Black. We can’t separate the two, but we can’t casually lump them together either.

The same goes for the relationship between the sacred and the secular in Black music. Religious themes permeate jazz, blues, rock and roll, soul, funk, house, and rap. Another essential part of what makes Black music Black is how its various genres incorporate religion. We can’t separate religion from Black music but we can’t casually make any assumptions about how religion is used in the music either. Historical context is everything. Celebrate Black music month by learning more about rap and religion.