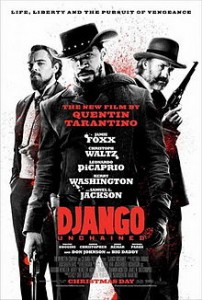 If you were worried that Django Unchained is a typical white man saves black boy buddy flick or that it over-sensationalizes slavery or that it otherwise sets back the race, worry no more. Django does none of those things. Now, if you were worried that Django Unchained would be filled with gratuitous violence, masculine bravado, and women characters as props, then your worries were well-founded.

The film isn’t terrible, but I wouldn’t call it amazing or award-worthy although I found it surprisingly funny. The first hour and a half I laughed in earnest on multiple occasions. Christopher Waltz is charming as Dr. Schultz and although Jamie Foxx is rather unbelievable as a slave the whole thing is unbelievable and that’s the point. Slavery is merely the backdrop for another one of Quentin Tarantino’s grand tales. Django Unchained is a genre bending masculine fantasy with a kickass soundtrack that consists of folk, classical, rap, rhythm & blues, and jazz.

Admittedly, it’s pretty cool to see a black man as the hero. I mean, how often does that happen? It’s also pretty cool to see a black man willing to risk everything not just for the woman he loves but a woman he calls his wife. It’s not like black marriage is regularly celebrated in mainstream films. But for real, did he have to kill everyone? And could Django actually have had some intimate interactions with his wife?  The two of them were more like strangers in the film. Both characters are pretty much asexual until the moment Django is almost castrated. It’s not like I wanted gratuitous sex to match the violence but a black leading man who has chemistry with his woman would have been nice to see. For once.

I clearly did not expect Django to change the film game. I did not expect to have profound conversations about the effects of slavery once the credits rolled. I did not expect it to be the love story critics brag about, but I would be remiss if I didn’t challenge the violence. We live in a world where men mass shooters literally take everyone out because their masculine privilege allows them to do so. Changing the murderer’s face from white to black isn’t an equal opportunity move. No real progress has been made.

The silence surrounding how violence functions in our society is deafening. Case. Point. Django could have ended three times before it actually ended.  But the choice to celebrate murder superseded Tarantino’s good sense to end the movie oh at two hours instead of two hours and 45 minutes. Yes, there must be stricter firearm restrictions regulations in the United States. There must also be greater regulations about how much violence we project in our public fantasies. And it would also be time in 2013 for a mainstream movie or two that tells the truth about how Americans have used violence to obliterate and subjugate entire races of human beings to celebrate white supremacy. But perhaps, we’re so much in denial and so much invested in escapist fantasies like Django Unchained that we wouldn’t recognize the truth even if it presented itself before us on a really big screen.