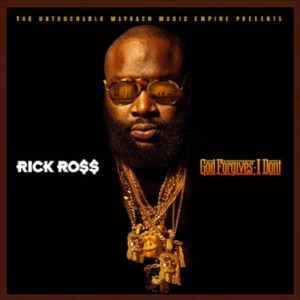 Well, I do, but Rick Ross doesn’t in the God Forgives, I Don’t album that officially drops on July 31, but leaked on the web as early as July 25. Ross claims that the album balances a grace-giving God and a ruthless gangsta.

MTV asked Ross for a five-word description of the album. He replied,

I like to think I understand hip hop. After all, I’m the author of Rap and Religion: Understanding the Gangsta’s God, but I’ve gotta admit, folks, I did not see Maybach Music Group becoming an industry powerhouse five years ago. Ross started out scratching his beard in his videos, and now I’m scratching my head in this blog trying to figure out how he became a major player.

The revelation that Ross used to be a correctional officer should have killed his career. It cast serious doubt on the veracity of his drug king pin days. (Don’t they do background checks?) Beef with 50 Cent has leveled more popular rappers. (I see you Ja Rule.) And yet, Rick Ross is now one of 3 Kings along with Jay-Z and Dr. Dre. Upcoming rappers are clamoring to be represented by Ross. (Really, Omarion, is Maybach the best home for you?)

Ross’s indubitable popularly maintained by sheer force of his will, his infectious hooks, and not his shirtless physique is the story of God Forgives, I Don’t. No boast is lost on tracks that brag about his financial successes, but one wonders, what does God really have to do with all of this?

I’ve previously explained in my blogs and my book that God shows up in expected places for four primary reasons:

It’s the profit incentive that motivates the Bawse. He makes it plain on “Ten Jesus Pieces.”

The track is about doing dirt and desiring to be protected by a higher power. The ten chains/Jesus pieces represent protection—like the donning of a patron saint (or saints) who guide their worshippers irrespective of their activities. Ross’s primary activity is getting paid and the blinged out Jesuses around his neck sanction this endeavor. Because he keeps getting richer.

The Jesus piece is such a powerful talisman that Stalley, a Muslim rapper featured on the final verse, raps about the historical power of a Jesus piece for the Notorious B.I.G., Nas, Jay-Z, and Kanye West. For the aforementioned rappers, Jesus has always been an icon of prosperity. In Rap and Religion, I explain:

Purchasing a blinged out Jesus piece is akin to consuming one’s salvation while erasing any contradictions between one’s ideas about Christianity and one’s desire for capital. This practice is firmly situated within Christian prosperity gospel messages that urge believers who tithe to expect affluence in return.

I also write about how complicated and problematic it can become for a black man to chain himself to an image of a white Jesus adorned with Africa’s conflict diamonds, but I’ll let you get the book for more on that. Whether rappers are doing more harm than good with their Jesus pieces is up to God to decide. Perhaps, it really is a good thing that God forgives.