Hip Hop’s 39th birthday is August 11th.  On that date in 1973 Clive Campbell AKA DJ Kool Herc hooked up his sister Cindy’s back to school party at 1520 Sedgwick Avenue in the Bronx. 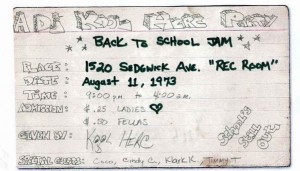 By spinning two identical records at the same time, Herc isolated the break beat of one record while accentuating the vocals on the other record. Then he spoke over the records to hype the partiers. The dancers on the floor responded to his calls and up rocked to the beat. These practices were soon known worldwide as DJing, MCing, and B-boying.

I’m sure Cindy never imagined that her $.25-$.50 cover charge to raise money for school clothes would turn into a multi-billion dollar enterprise. Of course, hip hop did not emerge full sprung from that party. Herc and the other godfathers of hip hop practiced and honed their crafts before and after that night. Others argue that “Rapper’s Delight” the first rap song to receive regular rotation on the radio in 1979 marks the birth of hip hop. No matter when you date it, hip hop has been in existence for over 30 years and has changed quite a bit from its inception.

In honor of hip hop’s birthday, I’d like to explore how we went from this

The videos’ differences are much more striking than their similarities. “The Message” is a classic hip hop joint celebrated to this day for its realness. Melle Mel speaks the truth about the rampant unemployment, drugs, and imprisonment that characterize his hood. We see these images in the video. There’s no gloss. There’s no alternative. There’s no escape. The repetitiveness of the track reiterates feelings of hierarchy, confinement, and lack. In the chorus he laments:

Don’t push me ‘cause I’m close to the edge

I’m trying not to lose my head

It makes me wonder how I keep from goin’ under

Whereas “The Message” is all about the hood, “Mercy’s” location is amorphous. The G.O.O.D. artists are in a parking garage safely tucked away from the streets. They rap about a Lamborghini Murciélago that not only represents extreme luxury but a means of escape. They are not teetering on the edge of self-destruction. They are driving away from anything that might restrict their limitless freedom. They are uninterested in the social origins of urban oppression. They willingly self-identify as the oppressors of weaker rappers in the game. There is no community outside of their crew. There is no connection to the less privileged. There is no consciousness.

How did this happen?

Hip hop has had multiple iterations between “The Message” and “Mercy” but the unifying condition is oppression—that experience of having your choices either severely limited or completely taken away by someone else. “The Message” identifies the origins and the consequences of that oppression. “Mercy” escapes from it.

During the Greater Depression (my term for this current economic crisis) hardly anyone can afford a $350,000 car but dreaming about having one sure beats ruminating on the fact that you’re under or unemployed and that more black men are under correctional control than were enslaved in 1850. When you can fantasize about your dreams coming true, why keep focusing on a problem that isn’t being resolved ? G.O.O.D. presents fantastical solutions in the guise of luxury—sex, watches, houses, pill-popping/pushing, and of course, the car. In hip hop’s third decade, fantasies are safer than realities. G.O.O.D. offers audiences the good life via euphonious dreams that resonate between their ears. It’s those dreams that keep hip hop heads from goin’ under.

No doubt. The game done changed. I intentionally chose Kanye West and G.O.O.D. as a case study, but had I been blogging about Lil B or Tyler the Creator or Tyga the differences between then and now would have been even more drastic. As a hip hop scholar, people ask me all the time whether I think hip hop is worse than it used to be. I tell them that it’s not a question of better or worse it’s a question of why have things changed. In my book, Rap and Religion: Understanding the Gangsta’s God,  I explain

Hip Hop is not dead, but it is getting dumber. The underfunding of public education in the United States has done a grand disservice to popular culture. Children who are no longer taught music in school, and who graduate barely literate cannot make sophisticated contributions to hip hop culture.

You see, the more things change, the more they really do stay the same. Hip hop is still the soundtrack for house parties like the one Cindy and Herc threw 39 years ago. And it’s still a response to the oppression Melle Mel rapped about in “The Message.” The beats and the message of “Mercy” might be new but the conditions that inspired them are still the same.

Happy Birthday Hip Hop. May you never forget your roots as your branches extend to the sky.