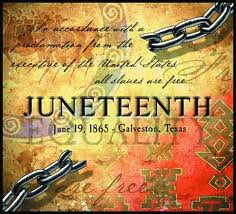 Juneteenth is a holiday that commemorates June 19, 1865, the date the last slaves found out that they were emancipated in Galveston, Texas. Even though President Lincoln signed the Emancipation Proclamation on January 1, 1863, word did not travel to Texas for two and a half more years. Sometimes called Freedom Day or Emancipation Day, African Americans across the country observe Juneteenth as a holiday that represents freedom from oppression. But oppression takes many forms and many Americans still aren’t free.

The Root published blogs about prisons and modern day slavery as examples of continued oppression. In addition to these physical and emotional forms of oppression, we should also acknowledge how the religious oppression that occurred during slavery still permeates many communities today.

The Christianity inherited by African slaves was a closed monotheism which meant that anyone who did not believe in the one Christian God would be eternally condemned. Some traders who either stole or sold Africans into slavery could justify their actions by claiming that Africans were heathens who would never become dutiful Christians, and thus were already condemned.

Ironically, this perspective didn’t last long because slave masters soon manipulated the basic tenants of Christianity to terrorize slaves into obedience. The bifurcation of good versus evil was a European concept unfamiliar to many African slaves who came from a more holistic worldview. Before colonialism and slavery, most African cultures did not have a devil. There’s a common saying that goes,

Slaves were encouraged to believe that no matter what hell they suffered on earth as slaves, it would be incomparable to the eternal fires of hell after death if they cavorted with the devil and revolted. Slaves were also taught about retributive redemptive suffering. They were conditioned to welcome suffering because suffering was just punishment for ungodly behaviors. Furthermore, enduring suffering would eventually result in a heavenly afterlife.

Although these strategies were wildly convenient for controlling slaves, emancipation did very little to end these radical misuses of Christianity. Christian intolerance continues today especially within communities that refuse to consider the possibility of supporting same-sex marriage. Accusatory devil discourse denigrates popular culture icons by linking their success to evil. Prosperity gospel implies that if you aren’t rich then you aren’t doing something right. Suffering is still encouraged as a way to reform “bad” individuals like poor people, women, and homosexuals.

There are rappers that continue to misuse Christianity to justify the oppression of others, but there are other rappers that rail against these oppressive religious tactics. Order your copy of Rap and Religion to read about rappers who represent both perspectives.

As we celebrate the emancipation of slavery, let’s also remember to emancipate our minds and hearts from oppressive religious beliefs.