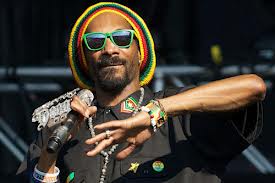 If you’re anything like me, you were scratching your head when the news broke that Snoop had a spiritual awakening and is not only Rastafari and a reggae artist but Bob Marley reincarnated. Hence, his new name Snoop Lion. While it all sounds supremely farfetched, I’d like to discuss appeal of Rastafari to gangstas.

Damian Marley and Nas’ 2010 collaboration Distant Relatives spoke the truth. Rap and reggae are family. The genres share a series of sonic and lyrical similarities. Unfortunately, both can be horrifically homophobic and misogynistic, but here are my top three redeeming qualities.

Reason number three is why I think Snoop is being drawn to Rastafari right now. He says he’s tired of hip hop because rap isn’t challenging or appealing any more. I’d argue that he’s moving towards a new spiritual system because Christianity has also lost its appeal. Let me break it down.

In Rap and Religion: Understanding the Gangsta’s God, I explain the appeal of a Christian God who is willing to ride and die with His beloved gangstas. A perfect example of this is the Baby Boy sample in “Pray for Us” the intro track from Rick Ross’s new album God Forgives, I Don’t.

The gangsta’s Christian God understands that a gangsta has to do what he has to do.  A gangsta is empowered not because God always shows him the way, but because a gangsta knows that God will forgive him when sin is necessary for survival. For many gangstas this is sufficient. For many other gangstas God’s silence simply will not do.

As an alternative, Rastafari empowers gangstas by rejecting the Christian concept of a silent white God and overemphasizing God’s love for oppressed blacks. In fact, some Rastafari theologies encourage black men to believe that God incarnates men and thus the black man is God. In this belief system, there is no need to wait for God to show the way. The God inside is always already prepared to do so.

Snoop’s book and documentary about his rebirth are forthcoming. So we can’t know with full certainty exactly what he believes or why he believes it, but I can say with certainty that his path of spiritual transformation is one that many gangstas have walked before him when they shifted focus away from a silent God out there to an active God down here.